Welcome to Longhouse's bibliography, covering 41 years of steady publications. The press was created by Bob Arnold in 1971, the year he was drafted by the Army and stationed with Consci-entious Objector status in southern Vermont during the last gruesome stages of the Vietnam War. Bob was heading there anyway ... being employed by a brotherly minister of the local Episcopal church, and therein was found the key to Longhouse's future: the church offices held an AB Dick mimeograph machine, & the rest is history.

Bob Arnold edited & printed each title entry below. Publishing, printing and believing would be greatly enhanced by Susan Arnold from 1974 onwards. All has been published & continued without a cent of financial assistance in the way of grants, fellowships, subscription and especially government or corporate funding. The dear "individuals" infusing the list of guardian angels, supporters and heart-felt benefactors are now legendary in the editor's mind. In the 1980s, a bookshop was established. Being too rural in location for the occasional visitor, Longhouse went online as a bookstore, and to this day the website supplements the necessary income to keep the press afloat. Gracias.

The following anecdotes were taken as self-interviews 'speaking' into the computer screen, a dizzy art-form in itself. Where the reader feels the "I" and "we" of the speaker are confusing (and it may be), just imagine a very old-fashioned cohabitated marriage (Susan & Bob) - where one is often both - and in this regard, as it should be.

The format has been purposely designed to act as a chalk board where the editor is certain folks will come forth with corrections as they read along, and remind the poor editor of his possible shoddy memory. Be inclined. The editor will also practice his own revisions, so these pages will be active with wings. New capsule portraits will begin at the start of 2007 since the Show must go on ~ 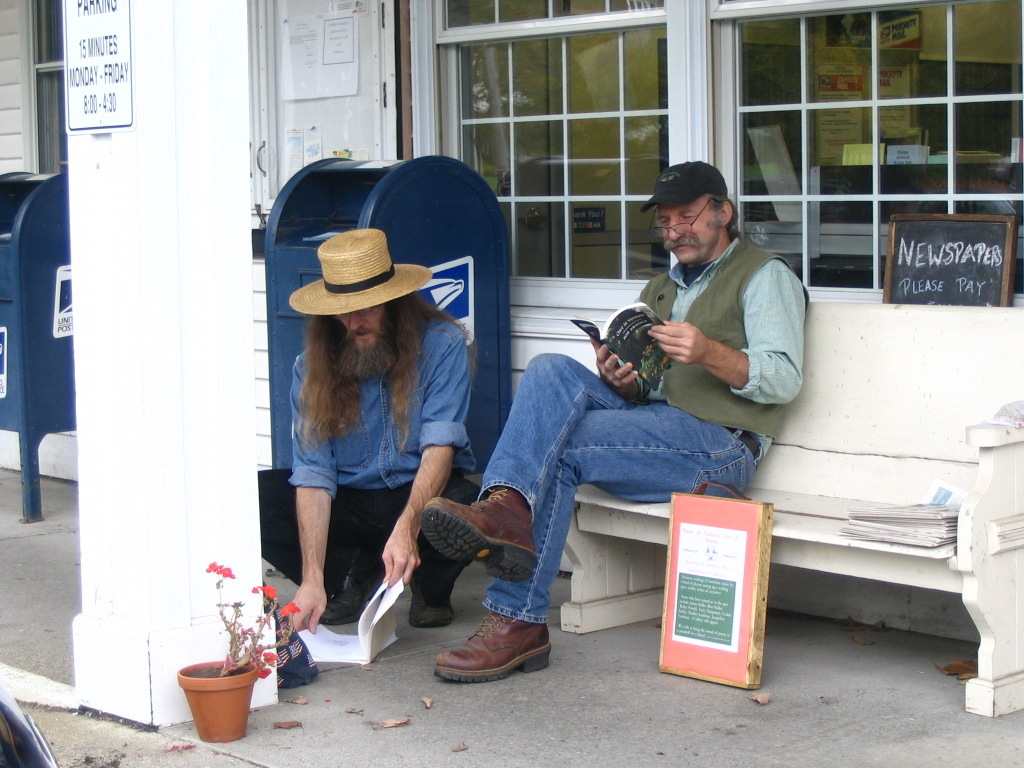 Greg Joly & Bob Arnold holding forth in a public reading forum of their own devise to raise awareness and possible funding to send down post-Katrina Hurricane to New Orleans.

These readings lasted a few years, often begun on a whim or direct plan. The results were always contagious. This one is outside the post office in Walpole, New Hampshire.

2012. Bob Arnold. I'm In Love With You Who Is In Love With Me. 168 pages. New and limited. Fine bright glossy pictorial wraps with crisp bright text throughout. Forty years with the same love, their family, same home and household, same location same river. 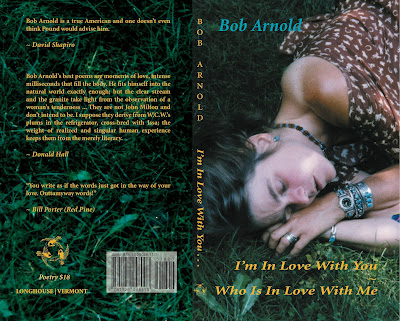 : cover photograph is from a serene location I always liked from my boyhood home of the Berkshire hills, and the woman on the cover is the subject of all the book — 40 years of love poems. It is the second book in the trilogy "Woodlanders" and collects together innumerable smaller books, very limited, that have been issued from Longhouse and other small presses over many years.

: Ross Hair and I share an affinity for the music and time of Shirley Collins and his immaculate poem flower portraits, as homage, do garden this foldout booklet with an elegance. Our thanks to Jeffery Beam for sending Ross our way.

: 'early', as in many decades ago when the poet, translator, musician and traveler Louise Landes Levi was heading out on her search for the being of poetry, love, and fellowship. Many of the poems are earthed in India where her earliest travels took her. Selected by Bob Arnold from a vast array of the poet's earliest notebooks. 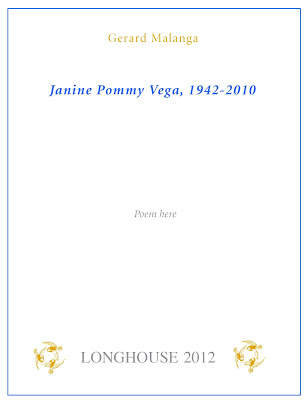 : a poem written by Gerard for our mutual close friend Janine Pommy Vega that I had heard about and went asking GM if we could reprint the poem in our series of postcards from the press called "Fabulous Futures". Typically, Gerard was more than obliging. Postcard came forth.

: this all came about when John sent me his latest beauty Nehemiah Grew, a book off the land and midair where he lives and moves through in many places Illinois. I had picked up our week of mail in town and had some time to kill parked with the truck in the shade and began reading John's new book and was so taken by a section titled 10(13), and couldn't think of the sequence of poems being anything but a tiny booklet from Longhouse, so I immediately began to design in my head what we might be able to print up for John as a surprise booklet to send to him of this sequence. To simply move it further. We did this and await to hear what he thinks of this little stroke of independent-how-dare-you!

: a rare item indeed — an unpublished short essay from the legendary Vermont homesteader, after leaving the Green Mountains with her husband Scott Nearing for the rocky coastline of Maine and re-establishing a home place. . .two cats, independent, much like these two good earth builders, showed them the way in.

2012. Malcolm Ritchie. Some Small Lines on the Great Earth. Three color unfolding accordion booklet with thirty new poems. Poet, Buddhist and Japanese scholar, from the steward of the Arran Island of Scotland. New and limited. 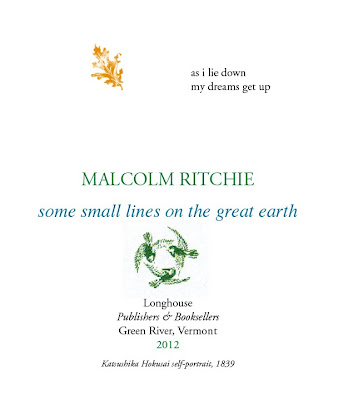 : you're on the Arran Island of Scotland or you may also be in Japan but you are most definitely with the poet Malcolm Ritchie wherever he may be, humbled, gracious, receiving, sharing, and very learned. The first of what we hope to be more small booklets to come.

2012. Eero Ruuttila. Today Poems. Three color unfolding concertina format with photographs and poems. Noted poet, activist and farmer shares his outdoor eye to many landscapes with poems and his photographs. New and limited.

: some years ago now I gave a reading at Eero's then courageous vegetable farm, spread as it was along the banks of the Merrimack River, same river Thoreau and his brother John once navigated with small boat and big minds. It was an autumn of flooding and the farm was sloppy with mudholes and plants itching to harvest. Another poet and I read in a greenhouse for a few stalwart souls that showed up, a few of those workers from the farm. Small Cambodian women as I recall. Eero did this every year for other poets and musicians and it seemed to help his good farm grow, plus make his own poems and photographs, of which I wanted to gather for a foldout booklet.

: right in the middle of writing up this final leg of the Longhouse Bibliography, to get us at least through 2012 (and more to come), Steve sent over from his Sierra Nevada foothills nest a sheaf of poems tucked into a new book of poems. I guess I had asked to see some new work about a year ago and so here it was, better late than never. I read the new book before supper, then the sheaf of unpublished poems after dinner, and before bedtime we had the postcard poem designed and printed up. . .

: . . .then after Susan went to bed I typed up this small booklet of poems dedicated to a Marine from the Gulf War and we'd print this booklet up after breakfast the next morning. Strangely, it's the first booklet we have published by Steve after decades of loving his work and always being quite content in the many small books he has gifted us over the years. He seemed to have it all covered. Happy we snagged a postcard and a tiny book to send his way.

: the most recent offering from the press by Andrew Schelling, and there have been many booklets over the years, drawing from the poet's personal notebook of poems, travel diaries, and translations. This booklet is a travelogue poem in the heart of the Rockies (where the poet has resided until recently) moving down ridge into New Mexican territory and the change and sweep of language, history and vista.

: just to show how insidiously sweet some poets can come about — I had known of Heathcote's writings for years — something about a bad boy anarchist from the UK, which I also received as a likewise classical mind savior. Gerard Bellaart had been for some time sending me Heathcote's poems in one more and another handsome publication from his Cold Turkey Press, he then bought and asked me to send my book Yokel to HW as a gift, who in turn bought a copy and sent it to Malcolm Ritchie, a lovely skipping stones moment in time. Less about me, I hope, and more about the sharing and soldikering on of fellow poets. This unity amongst all of us in a bubble of time generated my enthusiasm to fetch at least three booklets from two poets and still wanting to nab some of the art pieces of Gerard's, which will come. For now, jackdaw, in all his splendour.

: after Heathcote's "Jackdaw" cry, came the kneeling writ on sidewalks and walls "Mr. Eternity", a true to life poet of the streets who left his mark in chalk wherever he passed through. A Heathcote Williams portrait as long poem and photographs. One more indelible moment in time.

: wretched, troubling, serching, surviving haiku by one of the forgotten or never known (here in the U.S.) at all WWII generation poets of Japan, translated by one of our very favorite thinkers and heaven/earth philosphers Hiroaki Sato. His Miyazawa Kenji translations have meant the world to me since first discovered five decades ago and found, with many other Japanese gems, in a myriad of small press journals and publications. Ishihara is one more. We first took on the haiku, and as of this writing we're devising how to tackle the more demanding tanka unit. It'll come.

: like the haiku foldout booklet of Ishihara, we are offering the poems in as fullest content as possible: meaning Hiro's English versions, with the original Japanese, and charcters. It's just the width of the tanka and the lesser width format of our booklets that is holding us up on this one. We go out and work a little more in the garden or in the woods, and while in those sometime narrow passages, come back inside and creep a little closer at making a design for this booklet. It's planned for August. The Leo month.

: early October now issuing this so-far complete Longhouse Bibliography (1971-2012)— there will be more for 2012 which I will update by the end of the year. At least in the works are two books: a portrait of a backwoods Maine coast stalwart by the name of Jarvis Green as painted in no nonsense language by his neighbor Helen Nearing; plus a book of unpublished poems found in the notebooks of Janine Pommy Vega by her executor Bob Arnold. Kim Dorman will also select for us some years of his paper-only publication gleanings into a foldout booklet, spanning over his life and work living in three Texas locations: Austin, San Antonio and Houston.