in memory of Irving Layton 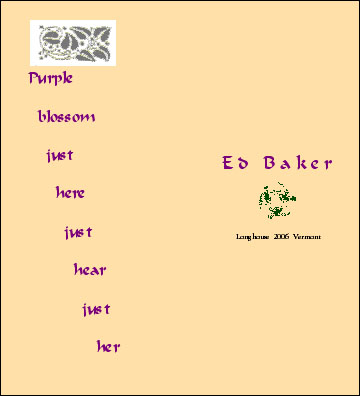 As an act of goodwill and for poetry - Longhouse is sending out each month complete publications - online - of one poet (or more) we have published in booklet, broadside or postcard form for everyone to share. It's a way of giving back to many of you who have sent to us poems, letters, purchases and the same goodwill over the years. The series will fly in under the banner of our Woodburners We Recommend. It should also be felt as a certain warmth in memory to all our close and dear poetry comrades passed along - each one becoming more of a loss. Each monthly booklet will also be available for purchase from Longhouse. Issued in a very limited keepsake edition of 50 copies. In 2006 we will begin to reissue and present past issues from Longhouse of select poets. For those readers that travel back as far as 1972 when Longhouse began, you know poetry was released like bandits by the day, by the week, by the month, and always free. We have never taken on grants and meant poetry to be seen & heard & on poetry terms. From 2006, into the Infinite, and within the universal cyber cosmos, we would like to share multiple poets with you....and only ask that you share them further.