A TREASURY OF BOOKS ~ BOB ARNOLD
for your poetry, backcountry collection & special gift-giving

Link! to the new PDF edition for the complete catalog of books & poem selections
updated April 6, 2008 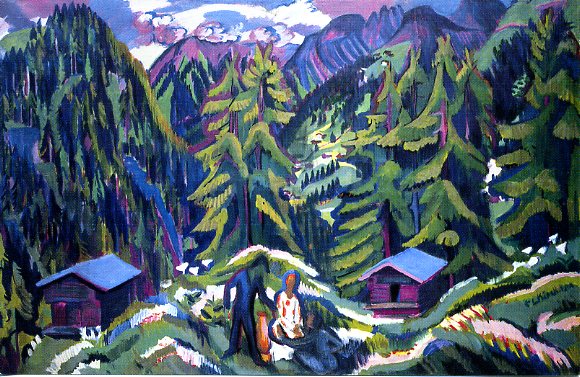 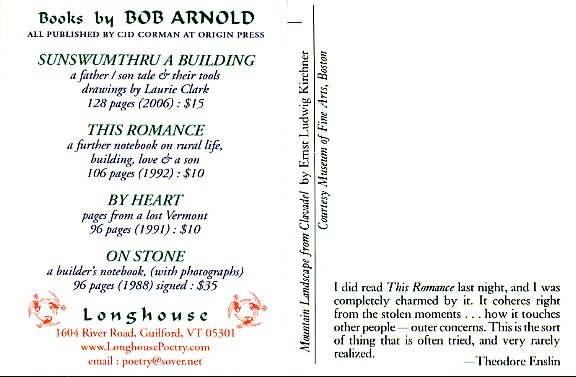 A selection from Once in Vermont

A Catalog of Books & Other Styles by Bob Arnold

8762. Arnold, Bob. ""A Line of Talk"". Longhouse, Spring 1986. First edition. 8-1/2 x 11 sheets hand numbered. Prose. An interview by the poet James Koller with Bob Arnold. Printed in an edition of 125 copies for friends of Longhouse. It will later be included in a collection of essays James Koller is currently editing. With a photograph of Bob Arnold and James Koller on the cover of the loose sheets which are tucked into a decorative letterpress wrap. Signed. Poet / Prose. $30.00

14435. Arnold, Bob. "Along the Way". Blackberry, 1979. First edition. SIGNED: Very close to fine illustrated stapled wraps signed with affection by the poet on the back cover. Poetry. $20

863. Arnold, Bob. "Beautiful Swimmers". A tale.. Longhouse/Origin, 1998. First edition. Signed. New in stiff wraps. Further travels with the author and his family teaching a young son how to swim (and other things), motel pool to motel pool , with the assistance of one Burt Lancaster from the film "The Swimmer". The young boy and actor getting along well.. Poet / Travel. $15.95

14958. Arnold, Bob. "By Heart". Pages from a Lost Vermont. Origin Press,1991. First edition. "This book comes from twenty years of living in the same place...My subjects have been what are close to me and some of the people I have interacted with, though most might not consider me a friend, but perhaps a neighbor..." New in wraps. Poet / Prose. $10.00

18887. Arnold, Bob. "Darling Companion". Longhouse, 2004. First edition. SIGNED. 1 of 100 copies. New in wraps. Signed by the poet -- "a traveler's tale from the east to the west & concerning a stop-over in Wisconsin to visit with old & new friends alongside the work & life of Lorine Niedecker before shoving further west into greater unknowns" Limited edition. Poetry. $25

23857. Arnold, Bob. "Dwelling". from a Builder's Notebook 6. Twelve Bells Press (U.K.), 2005. First edition. Dwelling is an occasional series devoted to an exploration of the notion of dwelling and the work of contemporary artists, writers and researchers in a variety of disciplines. Series editor - Christopher Morton. Very fine illustrated stapled wraps. This selection is taken from "On Stone, a builder's notebook" published in 1988 by Origin Press, Boston. Signed. Poet / Stone Building. $25.00

21458. Arnold, Bob. "Milking / Universe". Longhouse, 2005. First edition. SIGNED: Two books in one. Milking and Universe is limited to 100 numbers sewn and banded by Bob & Susan Arnold by the woodfire, dedicated to all those who work farm hour passages & Thomas A. Clark. Very fine sewn wraps with wrap around band, signed by the poet. Poetry. $20.00

865. Arnold, Bob. "On Stone". A builder's notebook. Origin, 1988. First edition. SIGNED: Very fine and bright all around with crisp text throughout. Includes detail photographs of construction from start to finish. Out of print. Stonebuilding / Poet. $35.00

14433. Arnold, Bob. "Self-Employed". Pentagram, 1983. First edition. SIGNED: One of 223 signed books. The papers in this book are from France, Italy and Japan -- handmade and mouldmade. Press work finished on Pentagram's 9th Anniversary. Very fine and bright illustrated sewn wraps. Signed on the half title page and inscribed affectionately on the first flyleaf. Poetry. $40.00

8765. Arnold, Bob. ""Souvenir"". Poems of the Journey by Trains, Car & On Foot Away from New England to the Southwest Highroad & Back. Longhouse, 1989. First edition. Printed in January 1989 and is limited to 100 signed handbound copies. Sewn wraps into tall letterpress wraps. SIGNED.. Poetry. $15.00

25526. Arnold, Bob. "Sunswumthru A Building". Origin Press, 2006. First edition. With drawings by Laurie Clark. Introduction by Thomas A. Clark. Very fine and bright pictorial stiff wraps with excellent square spine and crisp bright text throughout. The poet shares his memories and well hewn meditations on the various tools he has used in handcrafting the life and maintaining the homestead he shares with his family in Vermont. Poet / Prose. $15.00

Link to our Catalogs

New Arrivals to the Bookshop

Our Catalogs of Books - Poetry & More ! for Sale