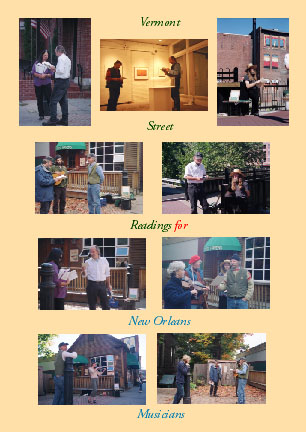 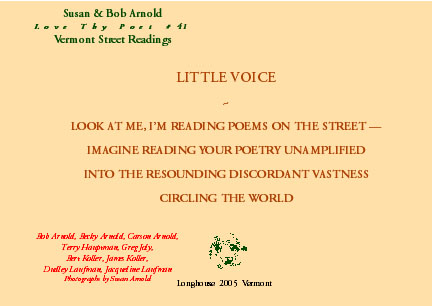 Last week in a Brattleboro, Vermont bakery overlooking the Connecticut River, sharing hot carrot potato soup and oat rolls, Greg Joly, Bob & I realized we've arrived at the third season of the street readings - summer, fall & now winter. Often three times a week, since Katrina and the levees ravaged New Orleans last August, Bob's been reading poetry on the sidewalk in some towns of Massachusetts and our home 'town' of Brattleboro, Vermont, with a violin case opened for donations. Literally every bit of spare change from quarters to dollars bills is sent to The Preservation Hall over these past months to support the New Orleans Musicians Fund. Greg, poet and letterpress editor of Bull Thistle Press, has been a cheerful and resilient partner with Bob for many of those weeks ...

The 'just so happens' sidewalk reading series began with Hurricane Katrina. While running errands one day in early September, Bob shared with me, "I'm going to give Greg a call when we get home to see if he wants to read on the street." Greg's response was a chuckling, "Uh...sure!" and so it goes. These sequence of nine photographs, although not chronological, show some of the cast of readers & musicians and the back drop to one of my favorite ideas that Bob's generated in our thirty plus years of married life: Vermont Street Readings for New Orleans Musicians.

(Photo 1) Terry Hauptman, poet and artist who shares her home between Vermont and Minnesota, responded with "I've been waiting for your call". I loved her sweet disposition and poems, having never heard her read aloud before. Terry and her husband have known Bob for decades. School girls would stop and listen when Terry and Bob read.

(Photo 2) James Koller and Bob read at Brattleboro's Catherine Dainich Gallery the next day after their sidewalk street reading in mid-October. Catherine offered her gallery for that lunch-time two hour reading. Jim and Bob have known each other since 1975 and read together once before in the late '80s. Over the years, Bob and Jim have spent many a late evening or near all-nighter talking in our Green River home. That day, in a town gallery, they read a cycle of poems for gallery visitors, invited to drop in for the on-going poetry event.

(Photo 3) Bob and Greg thought reading next to the mid-day Farmer's Market in Brattleboro, along the Whetstone Brook might draw some listeners. As it turned out, the passersby were more interested in buying a Thai lunch. No bother, the incredible heat that day and the bridge over the Whetstone still made a good home for that Wednesday in September.

(Photo 4) Jim and his son Bert Koller with Bob in October. It's really music that turned people's heads on the street, and Bert's heart-felt songs with Jim and Bob's confident reading brought it together just before it rained and rained and rained. Many thanks to Jim and Bert for their travel from Maine to Vermont.

(Photo 5) Bob and Greg are alongside the bridge that I love to walk on here in Brattleboro. This recently built footbridge crosses the Whetstone Brook from our local food co-op to the downtown and provided the stage that Bob used for a long reading of poems, walking over and over the bridge with poems flowing aloud and passersby intrigued! The day was brilliant and with the heat, the bridge's bit of shade was welcome. Even Greg's wide brim hat didn't provide enough shade that day!

(Photo 6) Terry and Bob reading at home at "their usual spot on Elliot Street". It's a bricked-in patio-style square, sort of free-for-all spot that has been used by a Middle Eastern food street vendor in the past, and a place to tie up your dog as you visit the nearby pharmacy or used bookstore; and now each week, these poets and musicians. I'm not sure who owns that area, nor does it matter. It is our's for that hour or two. When Terry last read with Bob on a cold November day, I ran to the nearby hospice thrift store to buy her a pair of gloves. We all laugh now remembering the summer's heat. And the memory still warms us as Bob and Greg set up the violin case, poster and snowshovel at the plot for this winter's solstice reading.

(Photo 7) Canterbury, NH's Jacqueline & Dudley Laufman are with Bob and Greg. Fiddle music, poetry and Jacqueline's chalk art work of poems and designs on the sidewalk really caught the passerby and the Brattleboro citizen this time. A banner day for donations and more so a wonder-day of spontaneity and friendships.

(Photo 8) Bob would read for fifteen minutes and Becky, our new daughter (in-law), alternated with fifteen minutes of ethereal violin playing. The frenetic Friday traffic of errands and business carried Bob's poetry and Becky's music into an amphitheater of newly found comradeship.

(Photo 9) Carson, our son and musician, with Jim, Bert and Bob at their "spot" and the maple tree. Carson loved the idea of Bob's street readings and although he hasn't joined his dad yet, it was his cue to set up at "at that bricked-in spot .... and if you keep doing it there, people will come to know you."

And so they have. Frankly, it's the strangers that have come to know the readings the best. A kind of curious thing: with those that are already acquainted, they stay aloof; whereas, the street kids, the smokers from the bar across the street, the out of town restaurant-goer, the elderly lady leaving the pharmacy, the young boy with the beatific wonder and smile on hearing a poem read especially to him -- they've learned a bit about poetry and maybe even a little bit about New Orleans and Katrina. Although the readings have been in other towns -- Massachusetts' Amherst and Northampton (already clustered with street musicians) -- I've loved the Brattleboro ones best. Forget that it's our home town of 35 years; maybe that it's just getting to know this mellow, artistic town even better. And besides, we're all just really walking to New Orleans with our hearts, music and poetry of little voices.

The readings will continue into the new year with Bob and Greg, and others will join I'm sure for the fourth season, spring! For more news and writings take a look at our Sidewalk web page. 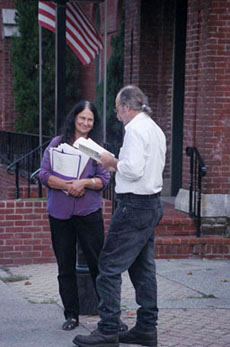 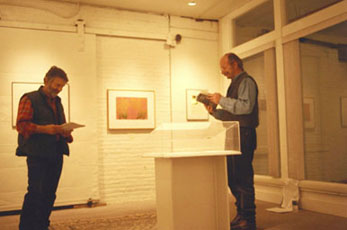 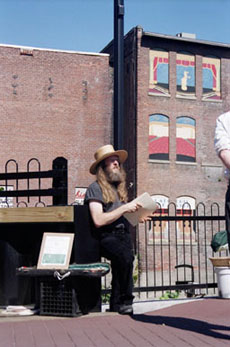 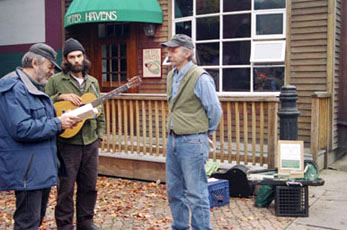 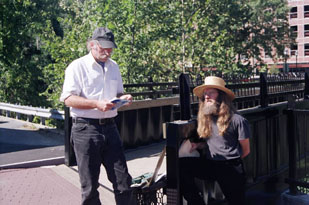 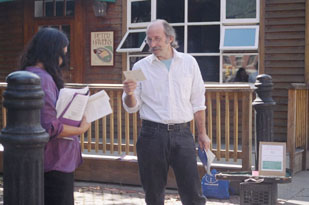 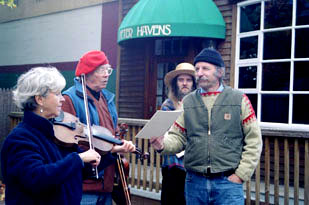 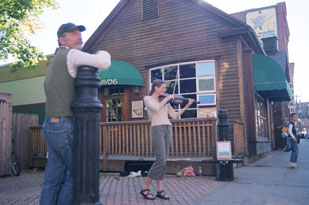 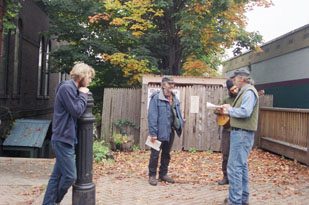